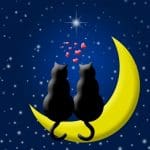 As star-crossed lovers go, Romeo and Juliet had nothing on Burton and Taylor, the charismatic motion picture stars who sizzled on the silver screen in Joseph Mankiewicz’s Cleopatra, Shakespeare’s Taming of the Shrew and Albee’s Who’s Afraid of Virginia Wolf? before flaming out in a real-life romance as spectacularly incendiary as any Tinseltown has seen.

The attraction between them was so strong that two of Elizabeth Taylor’s eight marriages were to Richard Burton. And the actors each believed the other to be the love of their lives.

Research astrologer and couples expert Alexandra Mark says a study she conducted years ago with the late Harvard University statistician John P. Gilbert, PhD, linked Burton and Taylor to a celestial pattern that turns up more frequently than expected by chance in married couples with staying power. Couples with this particular planetary combination are in marriages that end in divorce less frequently than couples that don’t have it in their compared birth charts (horoscopes).

“Professor Gilbert was more than skeptical of astrology; he was downright hostile. But he agreed to design the test and handle the statistical analysis because he apparently believed that astrology would fail and be discredited.”

“It was difficult for him to hide his disappointment when the testing twice produced statistically significant positive results for astrology. Replicating the original finding in a more tightly controlled “double-blind” follow-up test was important because it added strength to the argument that the result is not an aberration,” she noted.

Mark is a graduate of Boston University and has a PhD in comparative literature from Boston College. She has been a consulting astrologer since the 1970s and is the author of two books on the subject, Astrology for the Aquarian Age and Marriage: Made in Heaven.

Her article, “Sun-Moon and Venus-Mars Ties as a Prognosticator in Divorce: A Statistical Study,” published in The Mountain Astrologer magazine earlier this year.
Mark says the study of what brings couples together or causes them to fly or drift apart has been the major focus of her astrological practice. Modern statistical techniques make it possible to test some vary old theories, she suggests.

To predict compatibility and attraction, astrologers compare the natal birth charts of couples using a technique known as synastry, which establishes and evaluates the way the Sun, Moon and planets in the respective birth charts align with each other. Although a plausible physical explanation for why the technique works has yet to surface, rigorously analyzed statistical data supports its viability, she maintains.

Traditionally, in synastry comparisons, some angular relationships or “aspects” are presumed to be more powerful than others. This especially applies to the conjunction, which in a synastry comparison occurs when the Sun, Moon or a planet from one chart is in roughly the same degree of a zodiacal sign as the Sun, Moon or a planet in the chart it is being compared with. The opposition aspect, which spaces the compared planets roughly 180 celestial degrees apart in opposite zodiacal signs, is considered to be a powerful aspect as well.

When describing synastry, most astrological textbooks stress the importance of strong Sun-Moon ties between couples. In her practice, Mark says she has found that strong Sun-Moon aspects correlate with friendship on a deeply emotional level — the couples who think of themselves as being “best friends.” It doesn’t matter if it is his Sun and her Moon or the other way around. It works either way.

The other part of the marriage equation is the physical attraction or sexual “chemistry” everyone hopes to find. The possibility for personal “fireworks” of this sort is indicated by the way Mars and Venus are aligned in the synastry chart, she explained.

Mark points out that Taylor and Burton can be counted among a relatively small group of couples who not only have a strong Sun-Moon connection in their synastry charts but a dynamic Mars -Venus alignment as well. In the couples population, this double whammy occurs randomly about 10 percent of the time, or roughly once in every 10 marriages.

For Burton and Liz, the combination was more powerful than for most because both his and her Sun and Moon were involved in close aspects with each other, and his Mars and her Venus were aligned by opposition. They were friends on a deeply emotional level but there also was a strong physical attraction that kept things stirred up.

Although the famous couple was twice married and divorced, their will to be together was exceptional. And they defied every convention to follow their hearts, she observes.

In the modern era, marriages don’t last as long as they used to. However, Mark theorized that couples with both Sun-Moon and Mars-Venus ties in their synastry charts would spend less time in divorce court than couples whose synastry charts weren’t aligned in this way.

Gilbert agreed that this was a testable hypothesis. Over a period three years, two tests involving hundreds of couples were completed.

For the “double-blind” second test, Gilbert obtained birth data for 446 divorced couples from public records and had this information shipped directly to him at Harvard, where it was organized by assistants. For comparison purposes, the statistician created an equal number of computer-generated imaginary couples, who were electronically “born” in the same years as the real divorced couples.

Mark prepared synastry charts for both the real and imaginary couples without knowing which was which. When the comparison charts were completed, the information was sent to Gilbert for analysis.

Simply, if her theory about Sun-Moon and Mars-Venus ties was wrong, the number of real divorced couples with this combination would be statistically indistinguishable from the random, computer-generated imaginary pairs. But that’s not what the statistician found when analyzing the data.

Although relatively small for both groups, the combination turned up less frequently among couples whose marriages ended in divorce. The percentage of couples with the Sun-Moon and Mars-Venus ties was almost twice as high for the control group, which represents the population as a whole.

“The odds were two in 100 that this outcome occurred by chance, which placed the result well within parameters defined by statisticians as being statistically significance,” Mark said.

This news feature is from the Astrology News Service (ANS).  ANS is jointly sponsored by the American Federation of Astrologers (AFA), the Association for Astrological Networking (AFAN), the International Society for Astrological Research (ISAR), the National Council for Geocosmic Research (NCGR), and the Organization of Professional Astrologers (OPA).